I was invited by the Mozilla’s Developer Relations team to help with their presence at the Game Developers Conference and related events happening in San Francisco.

I was so happy to go this time as it was suppose to be my first GDC. I was invited to go to GDC 2016, but my daughter was born almost exactly on that date one year ago, so I decided to stay with my family.

My activities in SF was coordinated by Sandra Persing, and everything went perfectly smooth. The most important events of the trip were the two IGDA Mentorship Cafes and the WebVR demoing in the Children’s Creativity Museum, but there was SO much more happening! To keep track of everything I’ve decided to write the trip report day-by-day. It ended up being one of the longest, if not THE longest of my trip reports overall, so here’s TL;DR: it was awesome.

I landed Friday in the evening. The trip was long and exhausting, I only had a few naps and haven’t slept the night before, but being in the zombie mode already thanks to having a little baby made the 9h time difference irrelevant.

I was lucky enough to be picked by Michael Ellis directly from the airport - we went straight to the city centre to do some sightseeing. 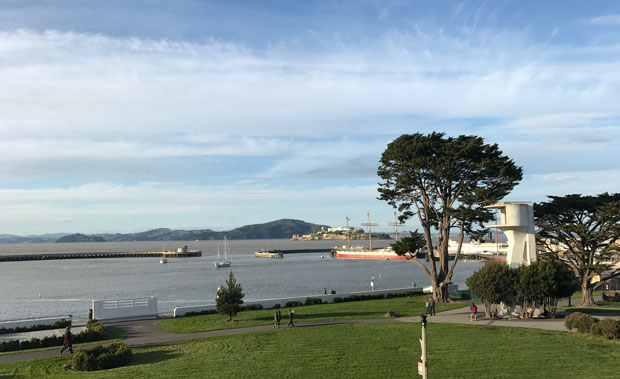 We went down Lombard Street, drove through Golden Gate Bridge and ate steaks looking at the Alcatraz out the window.

I was suppose to be busy later in the week, so we decided not to waste the time and meet with our friend Nick as soon as possible.

On Saturday around noon we went and grabbed Nick Desaulniers, an ex-Mozilla now working for Google. We’ve visited the Mozilla Mountain View office first, got lunch nearby, and then went for the Googleplex (also in Mountain View) - huge complex of buildings full of Google tech. 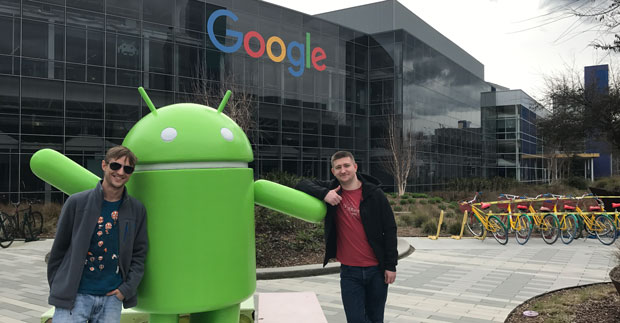 No surprise they have their own bikes to travel between the departments as it really looks like a small town. We went for a walk between the main ones and taking pictures in the meantime.

Sunday was the day when the jetlag kicked in, so I slept through most of the day (and night).

It was the day of the first official event in my schedule, the IGDA Mentorship Cafe, but it was suppose to happen in the evening, so there was still time to visit more of those famous offices.

The plan for Monday was to go to Facebook’s HQ in Menlo Park with Havi Hoffman, but she got sick and I was seriously considering skipping that as I didn’t want to go on my own. Fortunately enough Michael saved the day (again, and not the last time) and we went together. 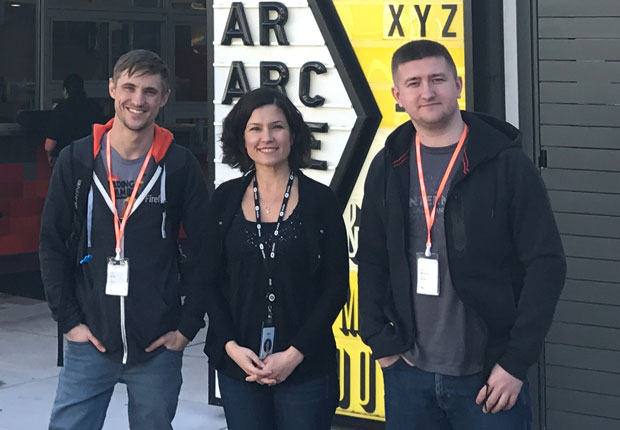 We met with Didem Ersoz there, a good friend of Havi, and went for some cool Oculus demos - including, but not limited to a local multiplayer one where we threw stuff at each other, and the Robo Recall game demo from Epic Games which was really impressive. 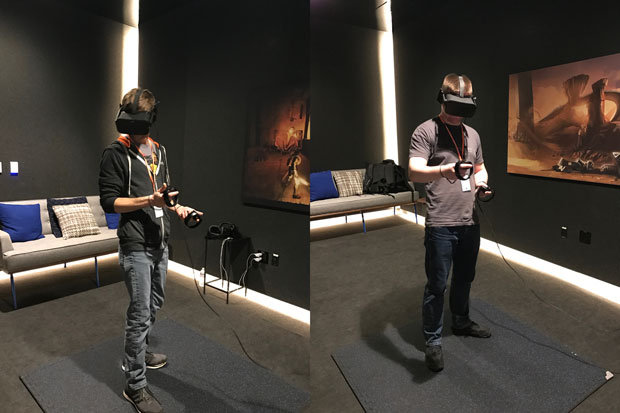 After that we ate lunch at the Mexican place. The cool thing was the building had an inner courtyard - completely surrounded by the building from every side, so it was only available for the employees, but the whole thing was in the open, no roof whatsoever. You could go for a short walk and there were restaurants and food places all along full of people serving food like it’s any other place, but for free and for Facebook employees (and their guests) only. 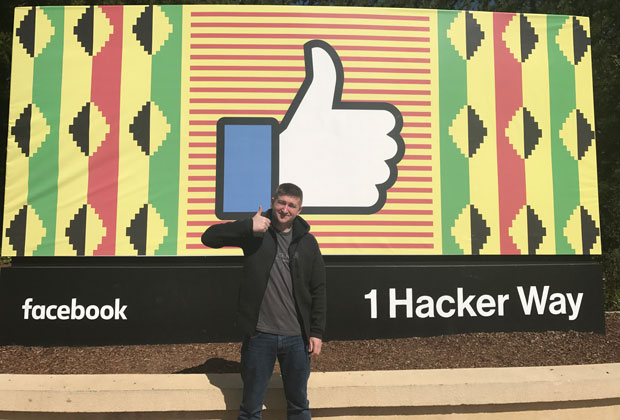 Facebook buildings were short and colorful - looked different than I thought they will look like. I wasn’t sure what to expect, but I was counting on something… more impressive? From the outside it looked like a generic bunch of buildings, but the offices inside were really cool, and the already mentioned interior blew me away.

I went straight to the Mozilla office in downtown San Francisco for the first Mentorship Cafe - it was organized by Jillian Mood, and the theme was diversity in games. I was a mentor and it was suppose to be a one-on-one short sessions with mentees. After one short talk of giving advice on anything a mentee would be interested about we were suppose to switch and pick another mentee to talk with. Interestingly enough we changed the original plan a little bit. 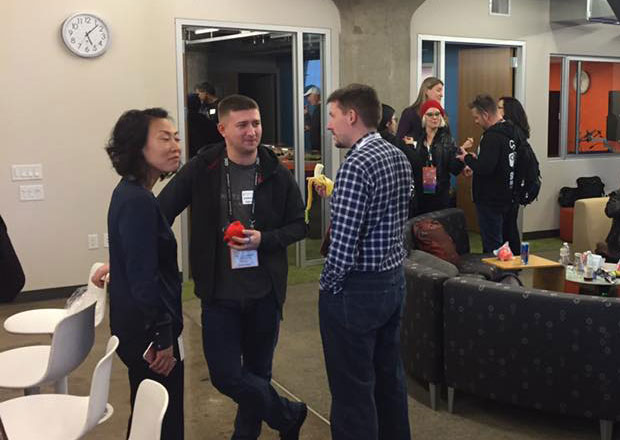 While we were waiting for the official start we already started talking with each other - I had two great discussions with mentees about their future. Then during one of the sessions we decided to keep talking instead of switching to a new one. Later on during the break a few mentors were talking with each other, and mentees started joining the discussion. It all evolved over the evening and we ended up having really great time! Even though I was a mentor I learned a lot from both my mentees and other mentors too. 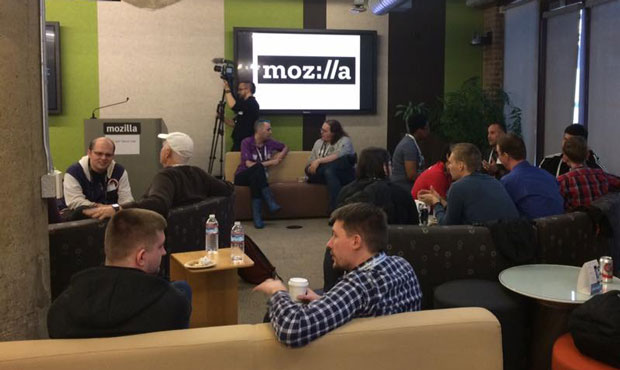 After that we went for the dinner with Mozilla, including Jukka Jylänki from the Games team, who was also mentoring, and Colin Creitz from Facebook. We ordered ossobuco - it tasted delicious.

Next day was also quite busy - I decided to go to the Mozilla Mountain View office again for the Tech Speakers monthly call, stay there a bit, and then return for the WebVR demoing.

Havi was sick, so I joined Michael in the call - we had some cool status updates from a few of the Tech Speakers. After the call I worked a little bit, and we also had a short break to play footbag and frisbee casually on the lawn at the back of the office as the weather was really nice. 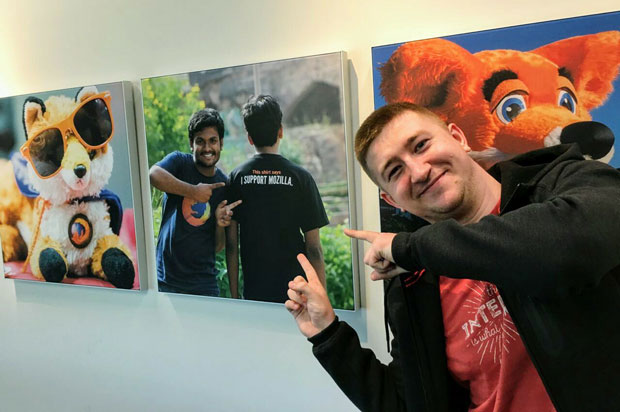 In the meantime I fell in love with the jelly beans from the kitchen - I haven’t ate better ones in my entire life, and they just sat there in a box like nothing happened. I really have to learn the source of that goodness.

The similar scenario like the day before - Michael got me delivered to the Caltrain station and I went straight to the next event, this time the Children’s Creativity Museum. We’ve set up the A-Painter demo using the HTC Vive headset, and Potch with Chris van Wiemeersch were demoing the application to all those who were interested in trying it out.

At some point the event theoretically ended, but the steady stream of people was constantly flowing at us, which was really nice. We did get a few cool 3D paintings during that time - it was interesting to see the level of detail some people were able to achieve.

I didn’t have any specific plans for Wednesday, but managed to get a few things done anyway.

I got invited to do a quick summary of the Monday’s Mentorship Cafe in front of the camera for the IGDA video recording. 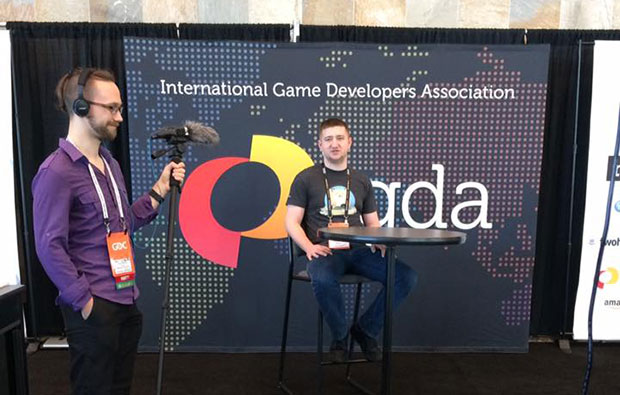 I don’t feel very confident in such situations, but I like to challenge myself from time to time - it went nice and smooth thanks to the lovely recording crew.

Later in the day I got the chance to finally meet with Mozilla’s new leader of the WebVR team, Lars Bergstrom. We’ve discussed a potential idea for the online competition similar to js13kGames, but about building games with A-Frame. It sounds like a perfect mix for me as I’m all into HTML5 game development, and my second passion is WebVR with A-Frame, so I really hope I’ll have their support to organize it.

I got invited by Jillian to the Canadian party happening in the evening. I tried poutine, the famous Canadian dish - it’s a mix of French fries and cheese curds, all fried and dipped in beef gravy. It tasted very good, especially with a beer. After talking with a few devs I left the party quite early and headed back to the hotel as I felt tired already.

Thursday was suppose to be quite packed again - Masterclass call in the morning and the Mentorship Cafe in the evening. 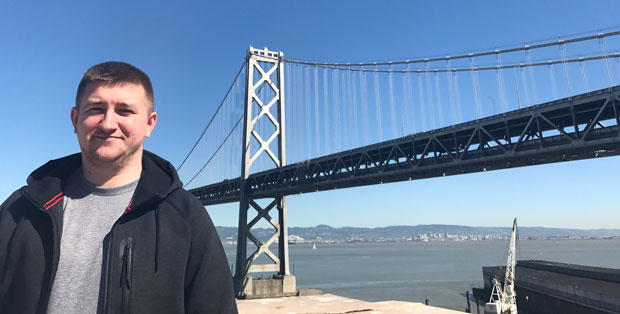 There was a Masterclass video call scheduled before the noon in the Mozilla SF office with Catt Small. We had some time to chat - it was great to meet fellow game developer using Phaser as the main tool of choice, even if it’s not her full time job. 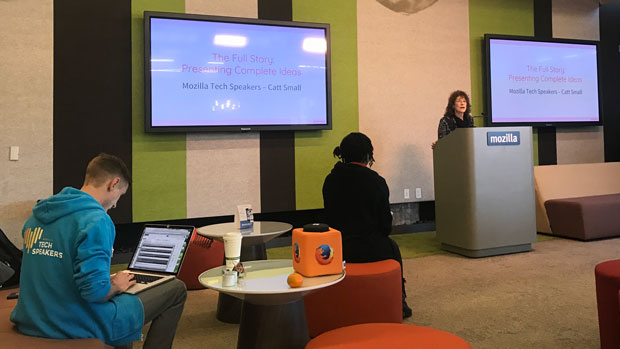 After that I still had some free time before the evening, so me and Michael took the bikes and drove on the Embarcadero all the way up to the Pier 39. It’s famous because of the seals there, and the view on the bay is really nice too.

Later in the evening I went for the second Mentorship Cafe, this time in the Amazon Loft. Julian did a great job organizing it again, and Jukka was there with me too as we represented Mozilla.

This time the concept of the evening was a little bit different - there were tables themed about different aspects of HTML5 game development like technical (where we were), business or design. Mentees could then join the discussion they were most interested about. 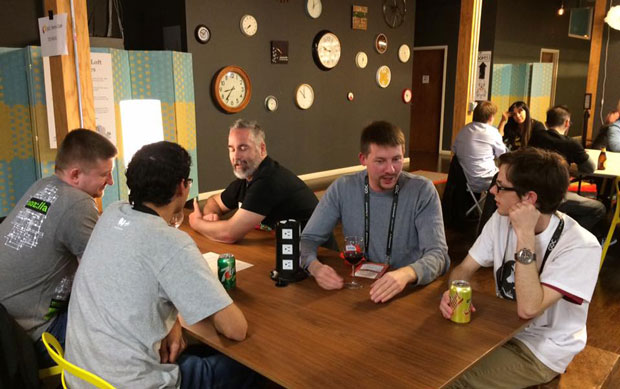 We had one guy who took his resume with him to get an honest feedback, so we mangled it all the way commenting every aspect of it. We had a lot of fun doing it, and the guy left happy, so I can call it a success. After all it was a different approach than the one on Monday, but also very cool.

It was one of those days with no plans in the morning, but a lot of things happening during the day anyway.

I finally bumped into Robert Podgórski - it would be strange for us both to be at GDC the whole time and don’t see each other. He introduced me to Vera who is a QA - we’d definitely benefit from some professional quality testing in our games.

I was also able to meet with Jimmy Joe McGurl from BLUR. We grabbed lunch together and had a good talk about the Launch Jam, game development and gaming in general. It was cool to finally meet him in person - too bad Oren Schindler, COO of BLUR, couldn’t make it to GDC though. 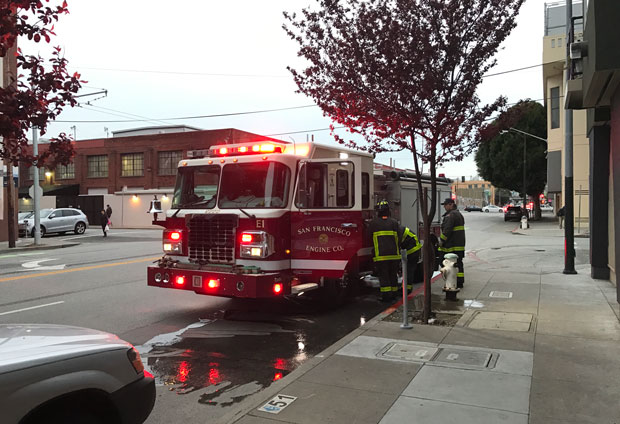 After meeting with Robert earlier in the day we agreed that it would be cool to grab something to eat later on. Fortunately enough there was suppose to be “Polish dinner” with - you guessed it - Polish gamedev community, led by Jakub Marszałkowski. We met at the Fang japanese restaurant close to the venue and had casual discussions while eating good food. Interestingly enough, later on I met Artur Perski from Vile Monarch who did art for the game Crush Your Enemies, my favourite mobile game lately.

It was finally time to departure and get back to Europe. I packed my stuff and went straight to the airport. It was raining a little bit, but I had a great weather through the whole stay - it was way better than expected because of the sunshine all days long.

The overall experience was very positive, the city felt so much different than New York or Orlando, it was my first trip to this side of US. Even though I haven’t attended any talks or missed all the fun at the expo booths, I still had a lot to do, was busy all the time and enjoyed every minute of it. 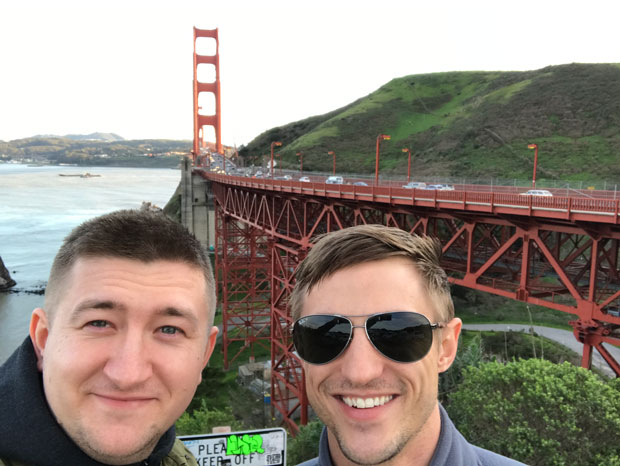 I couldn’t imagine it better - visiting so many cool places and awesome offices in one trip while meeting only the positive people in the process. I know my experience of GDC was a little bit different than the average one, but I highly recommend going next year if you have the chance as the atmosphere there is really unique.