Creativity at the Future of MicroPayments Conference 2020

Two weeks ago, on Thursday November 5th, I’ve participated in the Future of MicroPayments virtual (un)conference hosted on the Nexus Events platform, organized by Amber Case and Anselm Hook. 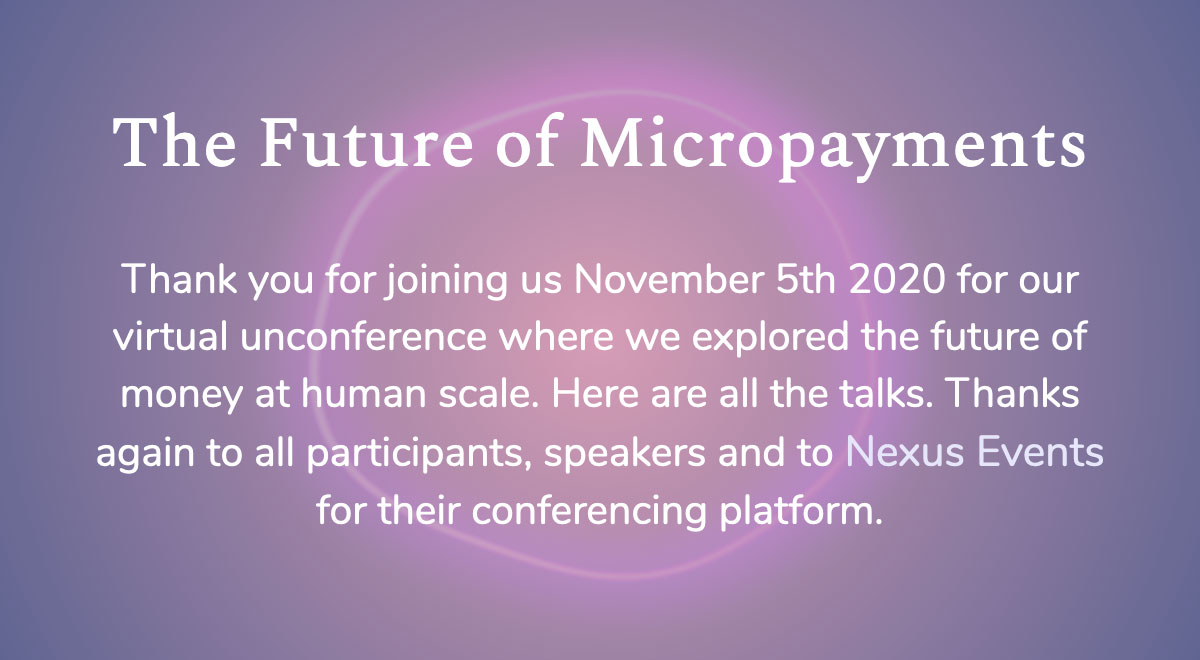 The event was positioning itself as the friendly, almost intimate gathering, where people could interact with each other rather than “just” watch the talks, and I think it was fulfilled 100%. Instead of having everyone in one Zoom call, there were many unique experiences along the way helping in learning about the other participants.

As a participant, every person answered a survey about what their interests are, what are they expecting to get from the event, and recorded a short video introducing themselves. Then, when the event actually started, you could watch some of the introductions assigned to you based on the same interests and similar answers to the survey questions.

After each one, you could request a connection to be made, and if both participants did this, the system was sending an automatic email, with useful info like the same answers to the survey, so you don’t have to check why you were connected in the first place. Later on during the day you could have a 1 on 1 sessions lasting a few minutes each with those people to actually talk with them, learn more, and make better connections.

The talks were also approached in a more interactive way: even though the videos were pre-recorded, the speakers were there in the chat to actually answer questions being raised while other participants were watching the presentations. This also helped to keep the schedule on time, since the organizers knew the exact times of the recordings, and as soon as one session was over, the next one could follow - with small delay to make sure noone’s lagging behind. 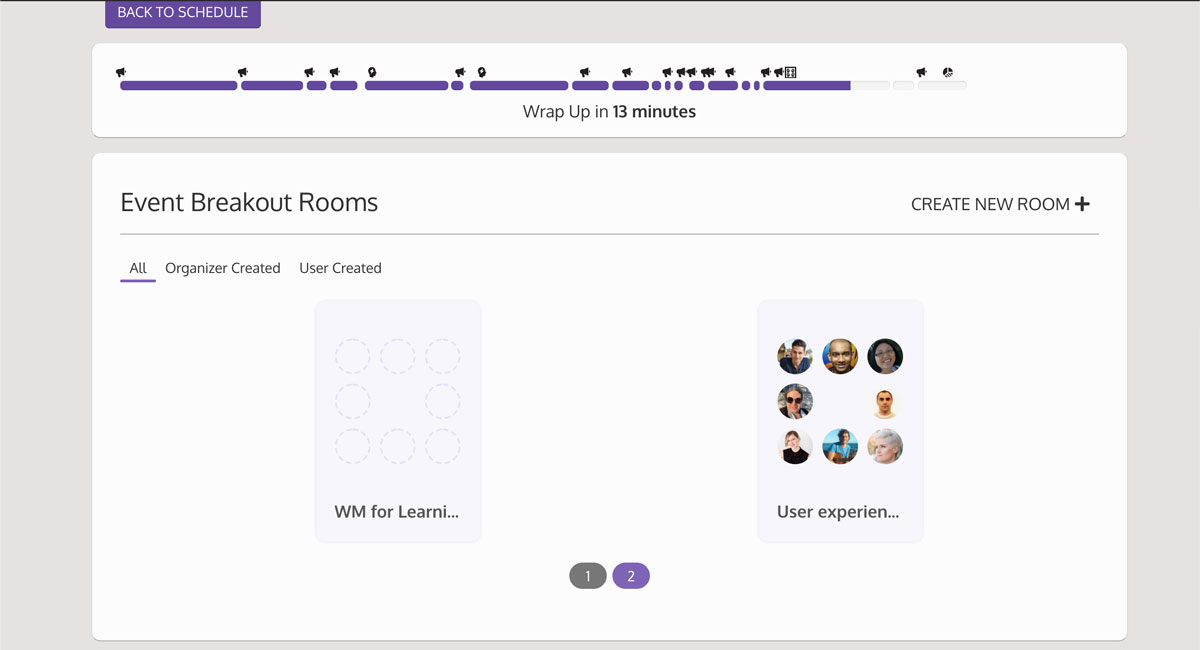 We had a fireside chat with Douglas Rushkoff, Stefan Thomas (CEO of Coil) talked about the attention economy, Yuriy Dybskiy (CEO of Puma Browser) did a showcase of micropayments in action, we were able to listen to some live music from Crystal Quartez, had a bunch of cool lightning talks (including Grant for the Web folks), and then even more interesting presentations, including Abishek Chadha going through the loot boxes concept in the NiftyCrates project, Jonathan Toomin talking about the capabilities and limitations for on-chain microtransactions using BitcoinCash, and many more. After breakout sessions and wrapping up, there was an optional post-event hangout in Mozilla Hubs.

I was asked to prepare a talk for the Creative track and discussions from the js13kGames point of view. I went with the saying “limitations spawn creativity”, which is 100% true in the competition. The level of innovation enclosed in 13 kilobytes of JavaScript was worth showing to the audience, and I’m sure Web Monetization can help the developers make a living out of creating games. 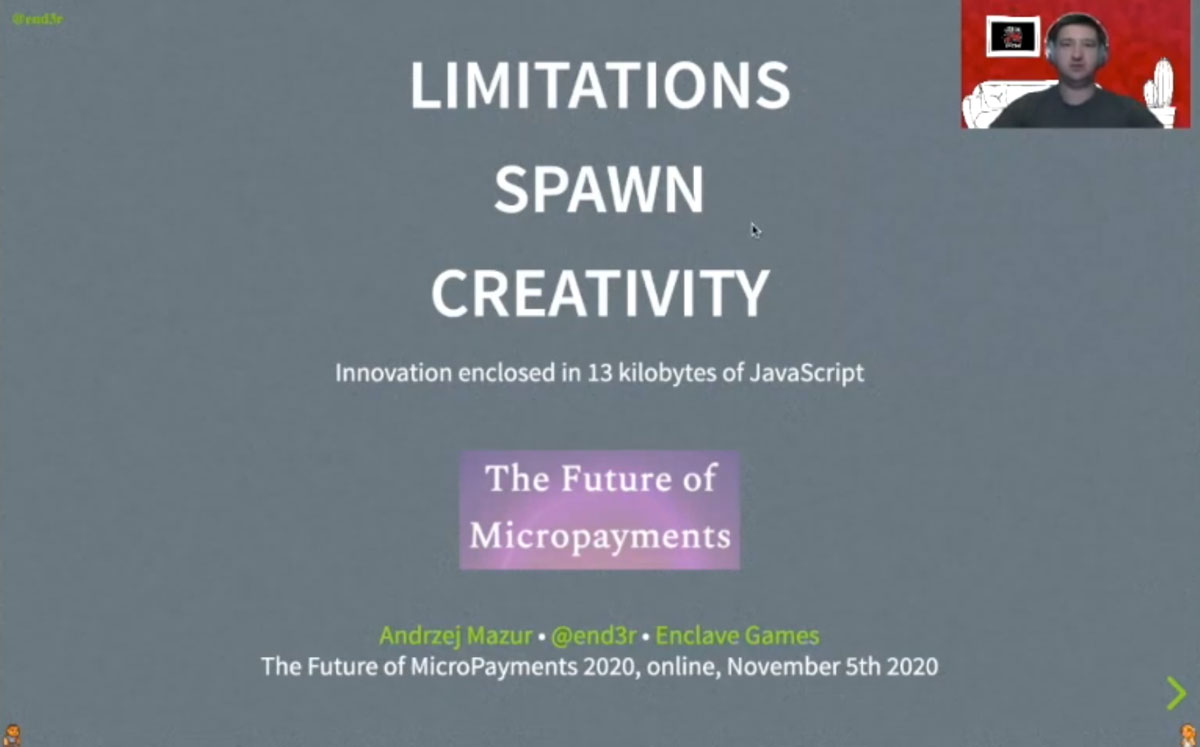 You can watch my talk on YouTube, but keep in mind I’m about to upgrade my super old Audio/Video setup, so the quality of the recording is not the best, sorry about that.

It was a very positive and enjoyable, unique online experience - the direct interactions between participants and the breakout sessions really helped make up for the casual discussions people usually have between talks during the live, on-site event. I’m really happy I was able to participate, and give a talk at the Future of MicroPayments. 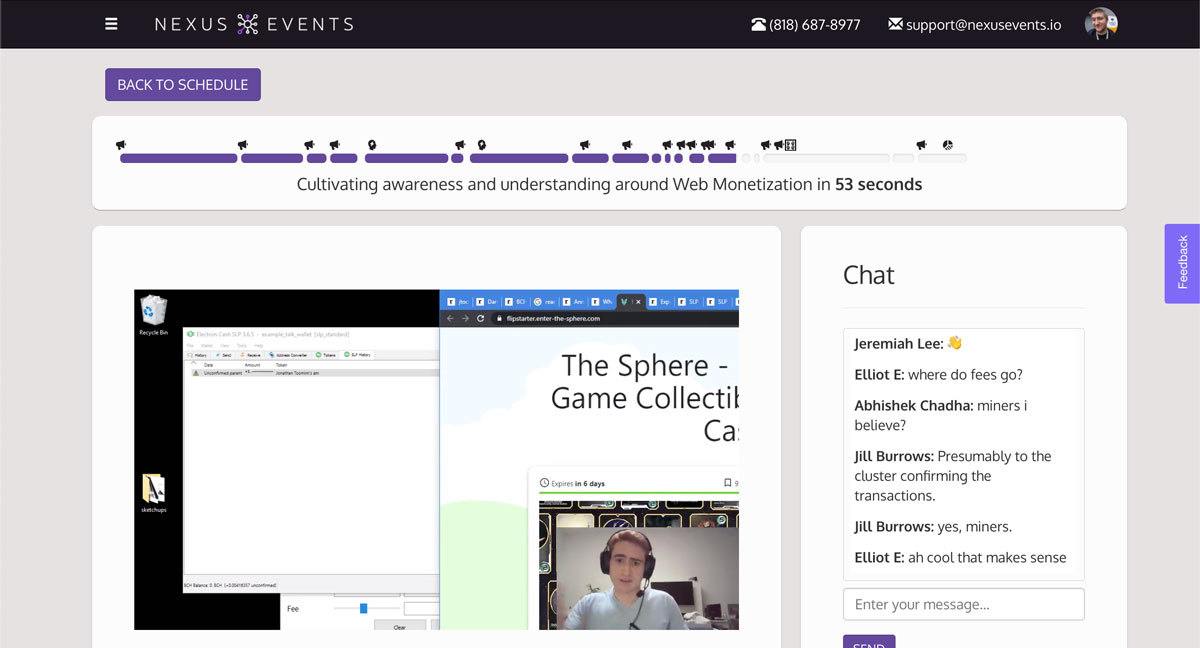 Watch the full video stream if you’d like to check all the presentations. From what I heard the organizers are considering doing more such events in the next few months, so keep your eye on this if it’s something that interests you!