The first edition of the online Gamedev.js Jam ended about a week ago, so it’s time for a recap. Long story short: it went well, even better than I expected!

You can read my announcement blog post for a little bit of background if you haven’t already. I’ve mentioned there that I had the Jam idea for a few years and was constantly delaying the start. If I knew it will be such a success I’d launch it way earlier, but it’s better late than never - after all it was very close to not being organized this year as well.

I didn’t knew what to expect, and was hoping for 100 devs to join who would eventually submit 20 entries, but the Gamedev.js Jam 2020 ended up with 220 devs submitting 44 entries and casting a total of an impressive 683 votes! I think those are really decent numbers given the Jam was announced only a few days before the actual start, and shared only in a few HTML5-gamedev-related places. First edition of js13kGames back in 2012 had 61 entries, so it’s not that far.

The Jam was hosted on Itch.io, which is a great platform offering a variety of tools to run it. Most of the functionalities were something I wanted to have in js13kGames for years, although it wouldn’t be possible to move that competition entirely to Itch as it lacks a few things, like the ability to have a few optional categories, or being able to contact the winners directly to send them prizes. It was almost perfect for Gamedev.js Jam though, at least the first edition. 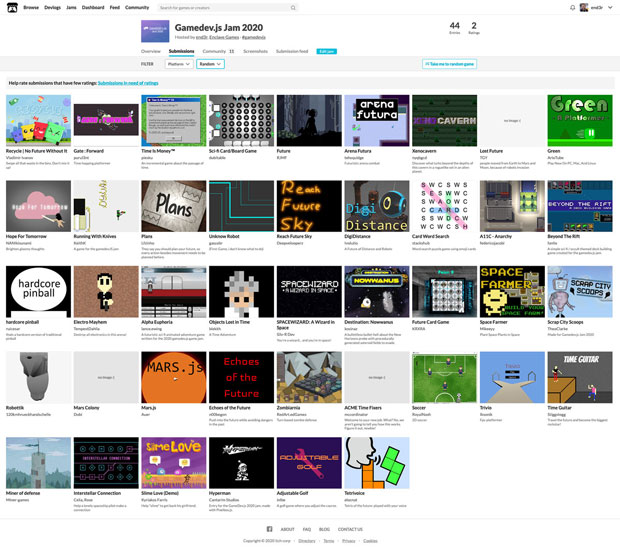 Organizing the Jam was also a great opportunity to start a Discord server, which now have 130 people. We had some good discussions going on during the Jam, and I hope it will be used after that as well. Feel free to join if you want to chat!

Overall, the time spent on organizing Gamedev.js Jam was way, waaay shorter than js13kGames, because of the huge difference in scale. We didn’t have Unity exported entries flooding the results which some JavaScript devs were afraid of, and the quality of entries was very good. People seemed to be really happy with how it went, I only received positive feedback.

I’m totally in for organizing next editions. In fact, it went so well, I’m considering having this Jam more than once a year. Since the first one went live in April (although I wanted it to be February, so it could be right between two editions of js13kGames), and js13kGames is four months later in August, then maybe we could have this Jam twice a year with the second edition in December? Who knows, let’s see how things go!