After the first meetup in Berlin two years ago it was time to have the second gathering of Mozilla Tech Speakers - this time in the Paris office.

The purpose of the meetup was still the same - to teach and learn from each other as much as possible. This time though for the lightning talks we were split into smaller groups, so you didn’t have to sit through all the talks, but enjoy participating in the workshops too.

There were four to pick from: Firefox Reality, IoT, WebAssembly and Rust. I almost managed to be on all four, which is an achievement on its own given we were suppose to pick two, and didn’t have much time for more.

The Firefox Reality one was more or less about toying with the Oculus Go devices and bringing the new VR browser to the headset, during the IoT workshop we covered the popular boards and played with the interactive examples, while WebAssembly and Rust did a proper intro to those technologies explaining the theory and showing some code at the same time.

I’m really happy I was able to attend as I always wanted to try those, but never actually had the opportunity, or the time to dive into it myself.

We had four amazing coaches to give us feedback on our lightning talks. Those were: Ada Rose Cannon, Jessica Rose, Vitaly Friedman and Marc Thiele. Our presentations were split into four groups with about eight people each. The coaches listened to every single talk carefully and gave a super valuable feedback, which was amazing.

In Berlin, after having an intense week of preparing for the lightning talk at the meetup, helping with the booth at the View Source conference, and accepting js13kGames entries in the meantime, I promised to myself I’m not going to travel anywhere near the dates of September 13th ever again, because that was just too much. Fast forward two years later and I’m in Paris for September 14th-16th. It was more than obvious it’s going to end up bad, and it did. 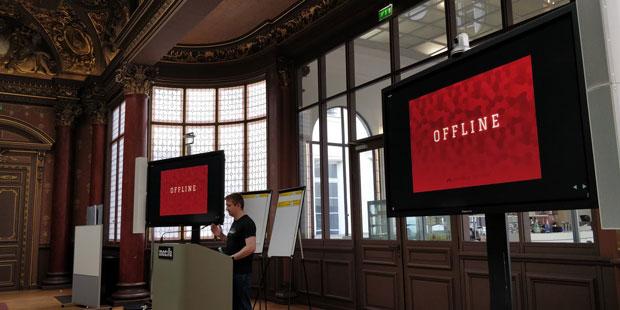 The js13kGames 2018 competition had a deadline for sending submissions, which is the same every year: September 13th, 1 PM CEST. I woke up and started accepting entries about 8 AM on Thursday 13th, and spend about 20 hours straight until I went to sleep around 4 AM the next day. Instead of sleeping for the next two days, I woke up 6 AM, packed my stuff and went to the airport. Later in the evening I was already in Paris, and skipped the sightseeing trip we had scheduled to prepare and send the Community Awards, both the email and the voting form. Then spent most of the night finishing up the game demo for my PWA lightning talk.

Saturday was all about workshops, and the next night was mostly about preparing the slides. I even skipped the Rust workshop in the morning to finalize the deck for the talk around noon. And then it all crashed and burned.

I mean, when I look at it now, it went ok. I was prepared for everything that could have gone wrong. The slides weren’t full screen as the resolution was higher than I was expecing, but I went with it without a blink. It was a brand new talk, so even though I knew what I’m going to talk about, I was struggling to keep it smooth because I was coming up with the exact words to say in time when I was moving to the next slide.

I practiced it three times in the morning and it was always below 7 minutes, so I didn’t even notice the timer on the wall and went with the flow. Then, a few slides before the end, I was told the time ran out.

I was literally shocked, as it happened to me probably for the first time in my life. For the past week or two I was constantly too busy to finish everything earlier, because the js13kGames competition just takes too much. But I was also confident I’ll make it on time, that everything’s going to be fine anyway, as usually is.

After getting the feedback, and sitting through the last talks in our session, I felt terrible, probably because the stress ran out and I was literally exhausted (both physically and mentally) after the competition and not sleeping properly for three nights straight. It sounds silly to overreact about being half a minute over the time during a lightning talk presented in a friendly environment, but it was as serious as the end of the world at that particular time. It is a valubale lesson for the future though. 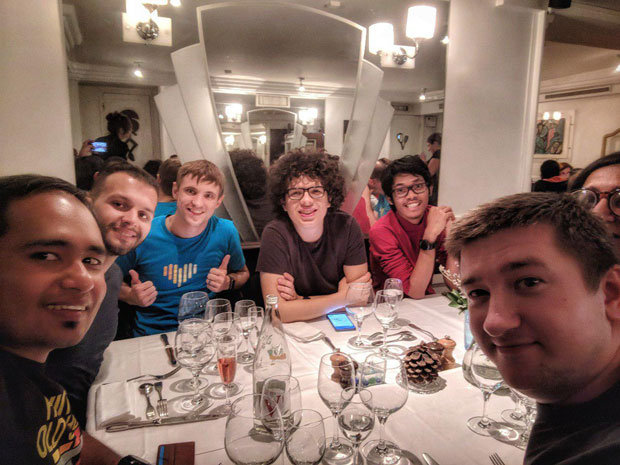 Interestingly enough, our bunch: me, Andre, Rabimba and Flaki went really ambitious with the demos for our talks, and they were either not entirely working, or the talk didn’t cover it fully as planned, with everything being fixed in the last minute. You can play safe, or challenge yourself with something new, which might end up bad.

Overall, I’m happy I was able to meet with some friends and learn new stuff. Thank you goes to Havi, Michael, Ali, Jean-Yves, the coaches, workshop teachers, and all the Tech Speakers for making this weekend busy and exciting.

If you’d like to join us next time, the brand new website is up, and the applications for joining the program are open.