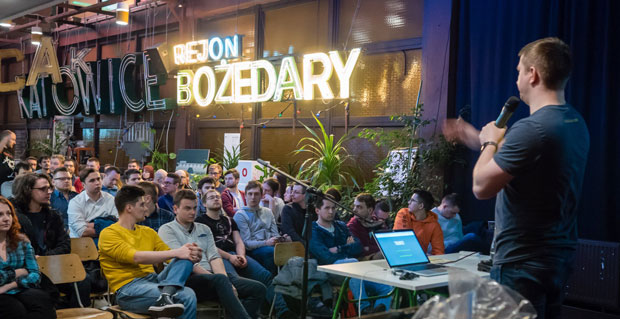 Nothing significant this month - I’m trying to catch up and prepare some games for the Facebook Instant Games platform. I know I’m missing a lot of revenue, but my number one job this year was to finally finish PWAs, and then start thinking about anything else.

The Progressive Web Apps series of articles are completed. Those are:

They were compiled and called Core PWA Guides on the MDN Web Docs page dedicated to PWAs. I’m super happy to see them all online, and I hope you’ll find them useful.

It was an interesting month. I went to Katowice for Meet.js Katowice #1E with Gamedev.js, a special meet.js meetup with the game development theme, co-organized with Gamedev.js. My talk was about js13kGames lessons learned. The next day I was already back in Warsaw and gave a talk about A-Frame at the WebVR Warsaw #2 meetup, co-organized by SwingDev, Gamedev.js and Meet.js.

The third and the last talk that month was during the Warsaw IT Days 2018 - again, about js13kGames. That talk receives positive feedback whenever I’m presenting, which is really cool. I’m absolutely aware of the fact that I’m not a “rockstar” on stage, but I think the performances I already did rank me as a solid, decent speaker.

The book I did a tech review for, HTML5 Games: Novice to Ninja by Earle Castledine and published by SitePoint is out, after a few good years of writing. Another new, interesting experience to my collection.

After more than 3 months some people are still missing their js13kGames packages with t-shirts - I really hope those are just delays and they will sooner or later be delivered. Fingers crossed, as all of them were sent without tracking to cut down the costs. I’ve learned my lesson and next time I will offer less packages, but with tracking.

Visiting Kraków for yet another js13kGames talk, and Budapest for the next one. Preparing and leading A-Frame workshops, and then a hackathon. Trying to release something for the Facebook’s Instant Games platform. It’s going to be another busy month.