Last month I had the pleasure of visiting Munich, giving a talk to five hundred people and running a workshop about how to build games with Phaser at the JS Kongress conference.

First off, I was invited by Axel Rauschmayer to the JS Kongress program committee (along with Flaki) to help shape the schedule from the submitted talks. The conference itself was about JavaScript for web, hardware and games - I focused on the last topic.

I also wrote a guest article about the Current state of HTML5 game development in 2016 which was well received in the community and sparked some interesting discussions. 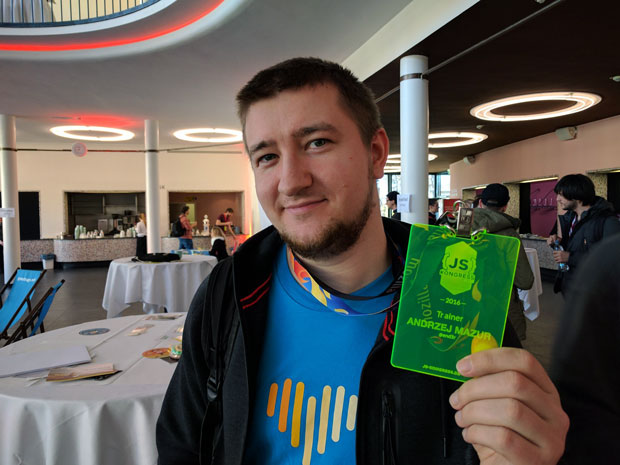 I also submitted an idea for the workshop on how to build a simple HTML5 game using the Phaser framework. It got accepted, so I was excited for the event that was going to happen on November 28-29th. I prepared all the materials - demo game and slides - from scratch. To be sure they work correctly and take the given amount of time to explain, I ran a test event in Warsaw a week before. I’d say the Munich workshop greatly accelerated the idea of getting back with Gamedev.js and organizing workshops and meetups in Warsaw, so this was the perfect opportunity to do so.

Most of the speakers stayed at the Bavaria hotel close to the venue, but I managed to find a cheaper place even closer - the Seibel hotel. The cool thing was the short walk from the hotels to The Alte Kongresshalle was next to a nice view on the huge tents where Octoberfest usually happens.

The venue itself was beautiful - more like an opera than a conference place. We had a tasty food during the whole stay, and lots of soft drinks including a local Mate.

It’s really great when the organizers take care of the speakers and show them cool places in the city. We had the sightseeing tour around Munich: walked to the top of Saint Peter’s tower, watched the surfers on a river in the park and enjoyed the Christmas Market. 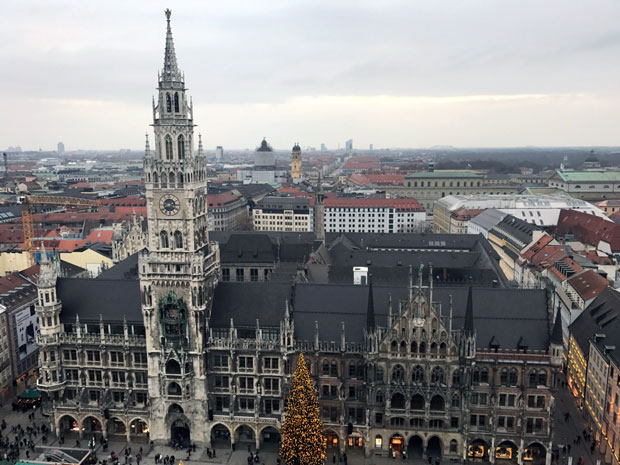 Then we went back for the speaker’s dinner and visited the venue which was next to it - view from the stage to five hundred seats looked amazing. I was a little bit sad I haven’t submitted talk and limited myself to a workshop. 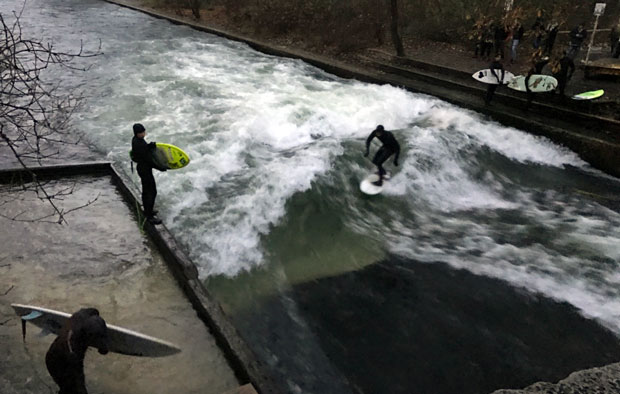 At the speaker’s dinner Axel asked who could give a talk next day, because someone couldn’t make it - I was sure I want to do it and volunteered immediately. I recalled my talk about building a simple HTML5 game in 4 years (or ”hating Wizard Quest”) that I gave a few days erarlier at meet.js Warsaw #19 and thought it would be a perfect fit.

The conference talks were very interesting, with diverse topics - I enjoyed the gamedev ones the most, of course. Martin Splitt did a nice intro to my workshop’s topic and showed how easy it is to build games with Phaser, Johannes Stein on the other hand used React to create one, and Seth Samuel focused on pushing the limits of GPU when rendering with WebGL. 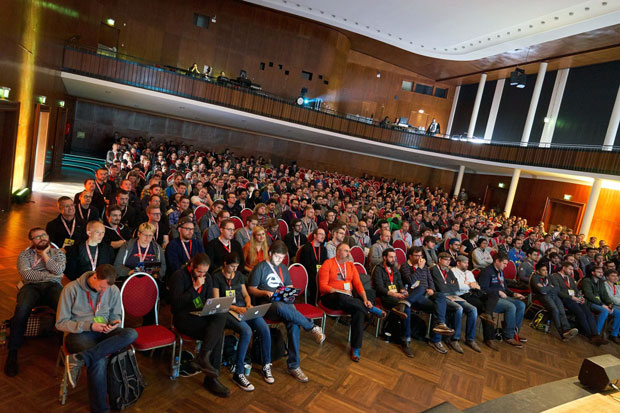 I really hope to see more conferences having gamedev related topics. It’s still a niche, but growing steadily over the years.

I was working on the slides and arrived a little bit late, so missed the keynote and the morning talks - I do plan to watch the recordings though. 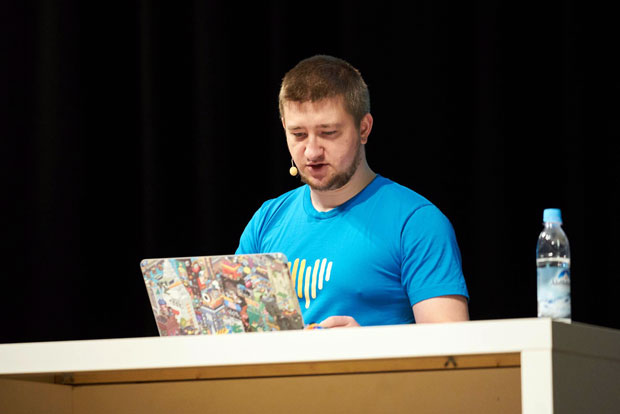 After the lunch I gave my surprise replacement talk about Wizard Quest and received great feedback both live and on Twitter.

“How to build a simple HTML5 game in 4 years” some honest titles at #JSKongress. (not your C++ in 21 days kind of timings)

I think it’s the first time when I managed to have a non-technical talk (without a single line of code), with tweetable quotes, funny images, memes and animated gifs.

Something brand new as I was usually giving a more or less technical intros to various APIs, or showcasing the implementation aspects of HTML5 games.

Previous talks were focusing on the technology while this one focused on the story, and surprisingly enough I wasn’t afraid to admit the game, and my approach to it, were a failure to some degree.

Having people respond with ”I have the exact same feelings and problems with my project” no matter if it was a JavaScript game, a website, or even an app written in a different language.

Tale of a web game that took 4 years. “Have no fear of perfection, you’ll never reach it.” ~ @end3r #JSKongress pic.twitter.com/jrGnwPWwgr

The story resonated with the audience and it felt good to not be the only one with those kind of struggles.

The evening of the second day of JS Kongress was all about workshops: from Angular 2 jumpstart, through GraphQL and Relay in action, to refactoring, robotics and transpilers. There was also a session on building games with Phaser led by me. 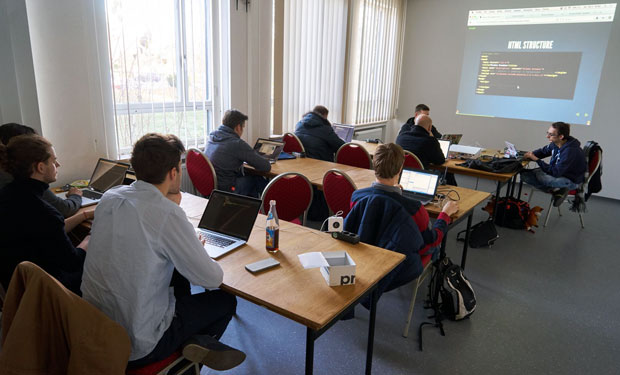 It was an introduction for those who have some basic JavaScript knowledge, but would like to build their first HTML5 game. We went through the source code of a simple Window Breaker demo, showcased the features and implemented all the important parts of a usual game. There was also a little time left to explain the structure of the Enclave Phaser Template if you’re more into having a solid structure of your project. 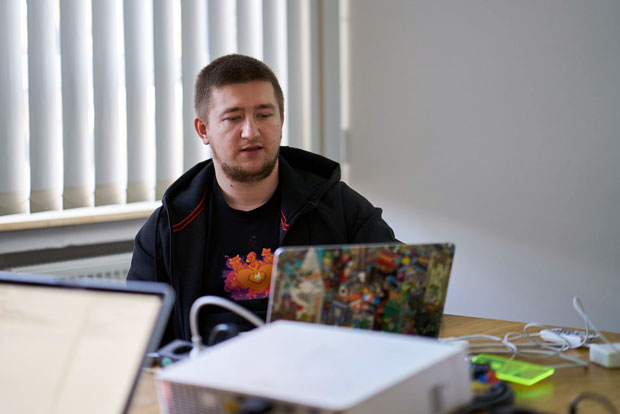 I hope attendees enjoyed the workshop as much as I did - I hope to do it on a more regular basis in the future and constantly improve my teaching skills.

The whole experience of being at JS Kongress was very positive - I’m really happy I had the chance to share my experience and knowledge with the attendees. I met awesome people, ate good schnitzel and drank even better beer, tasted chesnuts for the first time. Oh, and decided to give a talk in front of 500 people the day before it happened without much stress about it.

Check out the photos from day one and day two to see how it looked like. The next edition of the conference was already announced, so I can invite you all for 2017.