I decided to take a personal challenge and try to make one game per month this year. Half of that time already passed, so let’s see how it worked so far. 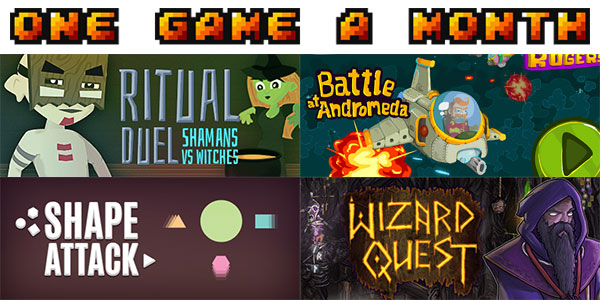 If you do the math correctly, half a year is 6 months, so you’d expect 6 new games from Enclave Games. I’m not sure how to tell you this, but there are good news, and the bad news. Start with the bad news first? Okay then.

Yes, you guessed that right - I haven’t succeeded making 6 games this year so far.

Well, hey - I made more games this year already than I did in 2015! I know ONE game last year is something you can beat quite easily, but it could be worse, right?

Let’s see what have been done to miserably fail reaching the goal:

I’m gonna try the Twelve Games a Year “competition”, a little cheating variation on the One Game a Month approach. It will be extremely hard to do that, but if I was able to finish Wizard Quest, then everything’s possible.

As you can imagine trying to do One Game a Month was very optimistic, even more if you consider I’m writing some articles for MDN lately and my baby girl Kasia was born almost four months ago. But well, it is a good personal challenge that don’t have to be completed 100% to be considered a success - if you’re struggling to finish a game you should try it too!